カリフォルニア大学リバーサイド校の物理学者と同僚が、なぜ反物質ではなく物質が宇宙を支配しているのかを説明するために、宇宙論的衝突型加速器を利用することを提案しました。 UC Riverside physicist and colleague invoke the cosmological collider to explain why matter, and not antimatter, dominates the universe 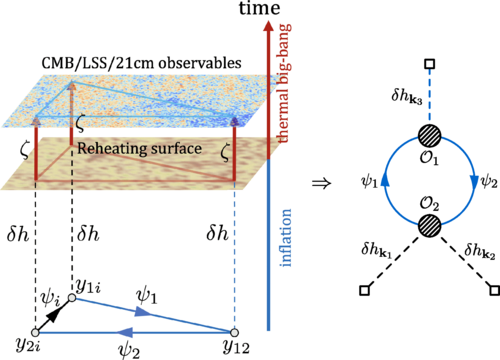 Leptogenesis is generally challenging to directly test due to the very high energy scales involved. In this Letter, we propose a new probe for leptogenesis with cosmological collider physics. With the example of a cosmological Higgs collider, we demonstrate that during inflation leptogenesis models can produce detectable primordial non-Gaussianity with distinctive oscillatory patterns that encode information about the lepton-number violating couplings, the Majorana right-hand neutrino masses, and the CP phases, which are essential to leptogenesis.

Leptogenesis is an attractive mechanism explaining the origin of the baryon asymmetry in our universe, and it is closely related to the seesaw mechanism for the origin of neutrino masses [1–6]. In the simplest leptogenesis scenario, a lepton asymmetry is generated from the decay of a heavy right-handed (RH) neutrino N, which is then transferred to a baryon asymmetry via the sphaleron process. Despite the appeals of leptogenesis, it is very challenging to directly test it, as the very high energy scales involved are generally beyond the reach of terrestrial experiments, in contrast to some of the low scale baryogenesis models (e.g., [7–21]). For instance, with hierarchical masses of Ni ( i=1, 2, 3), a lower bound exists for the lightest N’s mass: M1≳109  GeV [22].

In this Letter, we demonstrate that, thanks to the high energies provided by the cosmic inflation, leptogenesis may leave distinct and observable signatures in primordial non-Gaussianity (NG), inspired by the cosmological collider (CC) physics. In particular, the essential Sakharov conditions for leptogenesis such as L-number violation and CP violation, as well as the heavy RH neutrino masses, can be probed individually as they impact the CC signals in different ways. Our finding also leads to new types of fermionic CC signatures that are not yet considered in the literature.

CC physics has been recently developed as a method to probe heavy particles during cosmic inflation [23–51]. The energy scale of inflation, characterized by the nearly constant Hubble parameter H, can be up to O(1013)  GeV in single-field slow-roll models. Different versions of CC exist. The original version is an inflaton collider: by coupling to the inflaton, heavy particles with masses up to O(H) imprint the n-point ( n≥3) correlators of the curvature perturbation ζ. An alternative version, called the cosmological Higgs collider (CHC) [34], exploited the possibility that an appreciable component of ζ is originated from the quantum fluctuations of the standard model (SM) Higgs field H during inflation, through the modulated reheating process [52–55]. Compared with the original CC, CHC has the advantage of yielding large and detectable NG with less free parameters. With these considerations, along with the fact that the SM Higgs directly participates in leptogenesis via the Yukawa coupling, in this Letter we will focus on signals with the CHC.