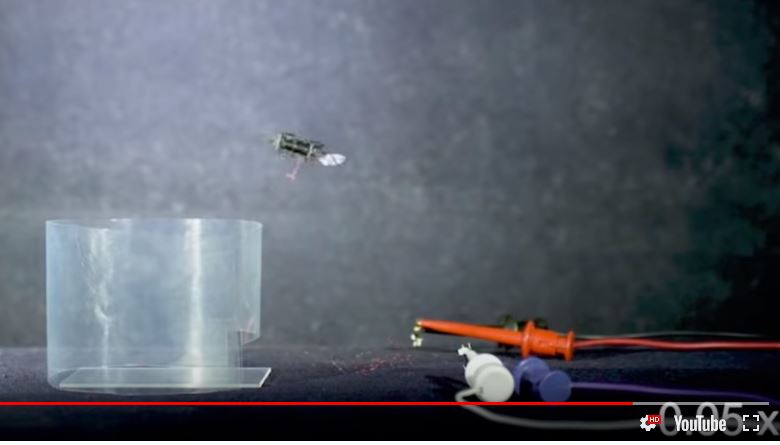 Flying insects capable of navigating in highly cluttered natural environments can withstand in-flight collisions because of the combination of their low inertia1 and the resilience of their wings2, exoskeletons1 and muscles. Current insect-scale (less than ten centimetres long and weighing less than five grams) aerial robots3,4,5,6 use rigid microscale actuators, which are typically fragile under external impact. Biomimetic artificial muscles7,8,9,10 that are capable of large deformation offer a promising alternative for actuation because they can endure the stresses caused by such impacts. However, existing soft actuators11,12,13 have not yet demonstrated sufficient power density to achieve lift-off, and their actuation nonlinearity and limited bandwidth create further challenges for achieving closed-loop (driven by an input control signal that is adjusted based on sensory feedback) flight control. Here we develop heavier-than-air aerial robots powered by soft artificial muscles that demonstrate open-loop (driven by a predetermined signal without feedback), passively stable (upright during flight) ascending flight as well as closed-loop, hovering flight. The robots are driven by multi-layered dielectric elastomer actuators that weigh 100 milligrams each and have a resonance frequency of 500 hertz and power density of 600 watts per kilogram. To increase the mechanical power output of the actuator and to demonstrate flight control, we present ways to overcome challenges unique to soft actuators, such as nonlinear transduction and dynamic buckling. These robots can sense and withstand collisions with surrounding obstacles and can recover from in-flight collisions by exploiting material robustness and vehicle passive stability. We also fly two micro-aerial vehicles simultaneously in a cluttered environment. They collide with the wall and each other without suffering damage. These robots rely on offboard amplifiers and an external motion-capture system to provide power to the dielectric elastomer actuators and to control their flight. Our work demonstrates how soft actuators can achieve sufficient power density and bandwidth to enable controlled flight, illustrating the potential of developing next-generation agile soft robots.

(‘Flying fish’ robot can propel itself out of water and glide through the air)水中から自力で発進して滑空するロボットシステムを開発。エネルギーは0.2gの炭化カルシウム粉末、可動部分は水を取り込む小型ポンプのみ。