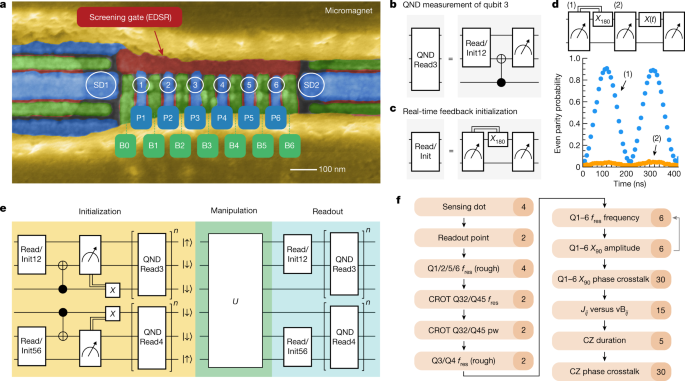 Future quantum computers capable of solving relevant problems will require a large number of qubits that can be operated reliably1. However, the requirements of having a large qubit count and operating with high fidelity are typically conflicting. Spins in semiconductor quantum dots show long-term promise2,3 but demonstrations so far use between one and four qubits and typically optimize the fidelity of either single- or two-qubit operations, or initialization and readout4,5,6,7,8,9,10,11. Here, we increase the number of qubits and simultaneously achieve respectable fidelities for universal operation, state preparation and measurement. We design, fabricate and operate a six-qubit processor with a focus on careful Hamiltonian engineering, on a high level of abstraction to program the quantum circuits, and on efficient background calibration, all of which are essential to achieve high fidelities on this extended system. State preparation combines initialization by measurement and real-time feedback with quantum-non-demolition measurements. These advances will enable testing of increasingly meaningful quantum protocols and constitute a major stepping stone towards large-scale quantum computers.

ソルトン湖が有毒な塵と化している理由(Why the Salton Sea is turning into toxic dust)